Tickets: 100 tickets at $50 per person will be available April 1st.

Terry earned this honor from JAMM because he has “made a significant contribution to jazz in Mid-Michigan” by founding and sponsoring the annual August Michigan (Lansing ) JazzFest for almost 3 decades and hosting live jazz at MICA Gallery and Urban Beat, and, especially for tirelessly promoting area jazz musicians—young and old.

JAMM is thrilled to have Terry Terry as our 2022 JAMM Honoree.

Doors open at 4:00 on 4/23
Featuring music by the JAMM Scholarship Band and Planet D Nonet

JAMM is looking forward to our Annual International Jazz Day Party on April 30, 2021. It’s probably going to be a Virtual Happy Hour Dance Party this year! Stay tuned for more info. Sign up for our free e-newsletter and Like us on Facebook/jazzjamm.

The big lockdown of 2020 has temporarily tamped down the fire of live jazz in Lansing to embers of memory. To behold the flame once more, and offer hope for its return, the Jazz Alliance of Mid-Michigan is taking its annual International Jazz Day bash online.

Friday, May 1, from 7 to 10 p.m., JAMM will stream an all-star jazz concert from Nov. 19 of last year for the first time, with every recipient who has received the group’s lifetime award, from bassists Rodney Whitaker and Gene Rebeck to drummers Randy Gelispie and Jeff Shoup, organist Jim Alfredson, pianists Ron Newman and Jeff Kressler and vocalists Betty Joplin, Betty Baxter and Sunny Wilkinson.

The watch party will help JAMM continue to distribute relief grants to area musicians who are hurting during an unprecedented dry spell.

Most of all, JAMM President Lois Mummaw hopes the party will “remind people what it’s like to be at a live jazz event and give hope that musicians will be able to play for live crowds again.”

Lansing’s thriving jazz scene, from Jazz Tuesdays at Moriarty’s to eruptions of international greatness from MSU’s stellar jazz department, supplied onstage miracles with the regularity of a public utility, building a close-knit, loving community of fans.

“I took it all so much for granted,” Mummaw said. “Now the thought of going out and sitting in a crowded room, or standing in a crowd at an outdoor festival, seems like a hundred years ago.”

In the quarantine era, Lansing area fans are getting their live jazz fix by from on line solo gigs from top musicians like organist Alfredson and guitarist Elden Kelly, but solo gigs only capture a part of the spontaneous give and take of jazz.

The East Lansing Summer Solstice Jazz Festival has been canceled this year and the fate of Jazz Fest and Blues Fest is up in the air.

For the last few years, the party was hosted by Gregory’s Soul Food at 2510 N. Martin Luther King Blvd. in north Lansing.

Gregory’s was again slated to host a Jazz Day Party April 24, a happy hour dance party with music from the JAMM Scholarship band, but the quarantine shut it down. JAMM is paying the band anyway, along with Gregory’s $250 rental fee.

This year, Mummaw hoped to connect with Gregory’s by organizing a pickup event to go with Friday’s live streaming event, but the logistics didn’t work out. Suffice it to say that if anyone wants the whole catfish and wings Jazz Day experience, Gregory’s is still open every day for takeout from 8 a.m. to 8 p.m.

The major artists featured in Friday’s streaming concert assembled to pay tribute to the host of WLNZ’s “The Vinyl Side of Midnight,” Mike Stratton. The evening was not only a musical showcase nonpareil, capped by a moving and soulful set by Betty Joplin, but also a celebration of jazz love the likes of which the organization had never seen before.

The stream also contains the dubious spectacle of this writer, making his only public speaking appearance of this millennium or any other.

The virtual tip jar will help JAMM continue to distribute $200 Musician Relief Grants to local musicians who have been sidelined by quarantine. The group has already distributed 19 grants and plans to distribute 12 more, thanks to recent donations.

“The jazz community in Michigan is so generous. It’s amazing,” Mummaw said. “I know $200 doesn’t seem like much, but musicians are hurting so much now and everything helps.”

The grants are named after Joy and Robert Brown, two stalwart fans who supported JAMM for years, well into their 90s, and could be seen at nearly every jazz event in the area for many years. Robert Brown died last October and Joy Brown died in March of this year.

“If JAMM wasn’t around, they’d be the ones writing the relief checks,” Mummaw said. “That’s how supportive they were. They were always interested in the younger musicians.”

JAMM is also putting out the word for local jazz musicians to submit their live streaming gigs to the organizations’s online calendar. Mummaw invited musicians to go the JAMM web site, jazzjamm.org, and submit their gigs to inform the group’s wider membership, to help tide jazz lovers over until the moon shines on the bandstand again.

We hope this post finds you and your family well. In these times of social distancing and venue closings, a live public space gathering of jazz musicians and their jazz-loving fans is impossible. Because JAMM’s mission is “to preserve and promote the tradition of Live Jazz across Mid-Michigan”, the Board of Directors of the Jazz Alliance of Mid-Michigan has decided to distribute $200 individual grants to Professional Mid-Michigan Jazz Musicians who are struggling financially because of cancelled gigs. These grants do not have to be repaid and any Professional Mid-Michigan Jazz Musician may apply.

To find out more about getting a grant, contact JAMM President at jammprez@gmail.com or by text at 517-242-1126 to access the confidential grant application process.

I spoke with Kevin Lavery from WKAR about the grant, you can listen to the interview here.

To donate in any amount, use the “Donate” button on the homepage – or – checks may be made out and sent to: 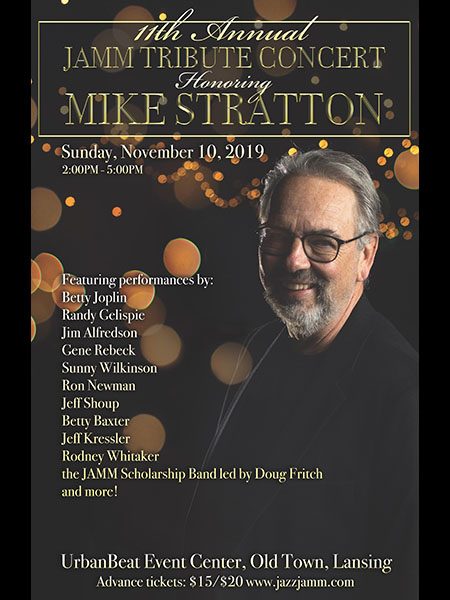 Mike Stratton has been the volunteer producer and host of one of the longest running jazz radio programs in Michigan, The Vinyl Side of Midnight (VSM), which is LIVE every Sunday night from 9 to midnight and repeated Friday evenings 7 to 9 p.m. VSM broadcasts from Lansing Community College (LCC) Radio, 89.7FM, WLNZ, or online at www.LCCRadio.org.

Attend the JAMM Tribute Concert and hear many of the musicians Mike has interviewed over the years–Rodney Whitaker, Betty Joplin, Randy Gelispie, Jeff Shoup and more!
In conjunction with his role as a DJ, Mike has emceed numerous festivals over the years–East Lansing Summer Solstice Jazz Festival, Lansing Old Town Jazz and Blues Festivals as well as the Detroit Jazz Festival. He’s had the honor to give several preview lectures at the Wharton Center for the Arts over the past dozen years.

Advance tickets available HERE
$5.00 Student tickets at the door only

JAMM is so fortunate to be able to bring Mardra and Reggie Thomas to perform at JAMM Headquarters on September 22, 2019. Their CD “MATTERS OF THE HEART” is a perfect blend of jazz, soul & pop and was recorded here in Lansing. 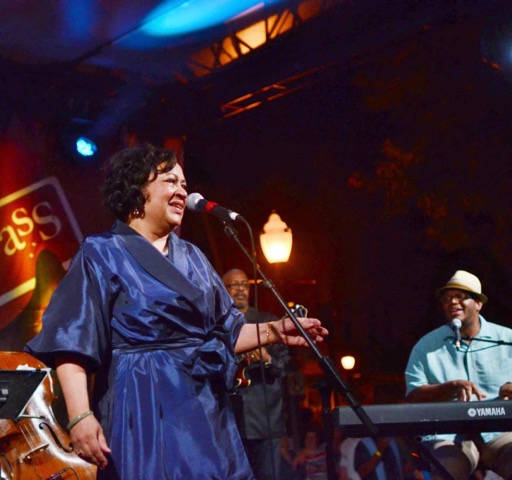 JAMM has the incredible opportunity to host two New Orleans legends on Monday August 12th. The concerts of duo Tom McDermott (piano) and Evan Christpher (clarinet) are like attending a master class in New Orleans music/musicians– they are both masters of jazz history and their instruments!

Tom McDermott is one of New Orleans’ prominent pianists and composers. In his 35 years in Nola, he’s played a wide variety of traditional piano musics: rag, trad jazz, boogie, stride, Brazilian choro, and the New Orleans piano tradition from Louis Moreau Gottschalk thru Jelly Roll Morton and Henry Butler. This spring he received his 7th review in the New York Times, from Jon Pareles: Tom McDermott mastered fearsome Jelly Roll Morton compositions like the aptly-titled Finger Breaker. He is a local luminary who deserves to be better-known.” Listen here.

JAMM PRESENTS our Spring Fundraiser Concert featuring Jazz Guitarist, Randy Napoleon and Jazz Singer, Melissa Morgan. Get your advance tickets HERE for either the 7:00 or 9:00 show on Saturday April 20th. Act now to make sure you get a seat for this once-in-a-blue-moon pairing of the “soulful and smart” jazz guitar professor and the “interesting, sassy, and sexy” rising star singer. 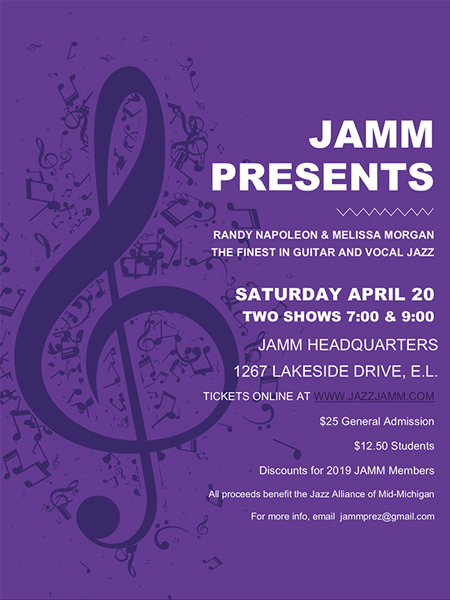 We’re working on a project that will take a bit of time to complete, so stay tuned!

We are assembling all audio and when available, all video of past JAMM Tributes and other events. We have quite an archive thanks to the work of JAMM Volunteers!

The main Tribute events we need materials for are:
Sandy Izenson and Patti Richards, especially photos. We have audio for both.

It’s great fun to listen to some of these, after all these years! Here’s a teaser for you, from The Second Annual JAMM Tribute to the late Patti Richards. Singing here, Betty Joplin, who was friends with Patti and shares a bit about that here as well.